I loved this “female Indiana Jones” meets “enemies to lovers” story! The myth Jillian was after made me want to believe it really existed, thanks to  Linda Howard vivid descriptions and brilliant writing, I could just “see” myself there. This book married with success adventure, romance, sizzling hot scenes and humor. A fiery heroine and an arrogant and sexy hero were the perfect combination! 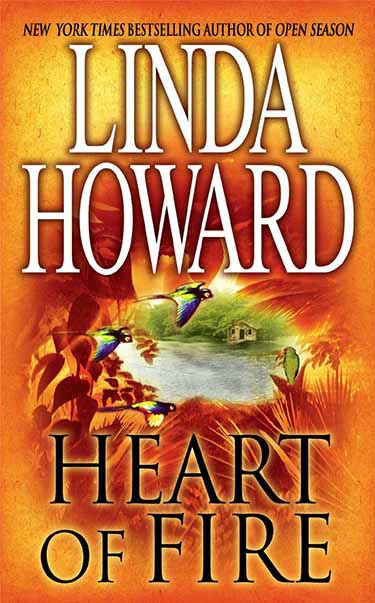 A fabulous lost Amazon city once inhabited by women warriors and containing a rare red diamond: it sounded like myth, but archeologist Jillian Sherwood believed it was real, and she was willing to put up with anything to find it — even Ben Lewis. Ruffian, knock-about, and number one river guide in Brazil, Ben was all man — over six feet of rock-hard muscles that rippled under his khakis, with lazy blue eyes that taunted her from his tanned face. Jillian watched him come to a fast boil when she refused to reveal their exact destination upriver in the uncharted rain forests — and resolved to stand her ground. Neither of them could foresee what the days ahead promised: an odyssey into the fiery heart of passion and betrayal, and a danger that would force them to cast their fates together, immersed in the eternal, unsolved mysteries of love….
.

Jillian Sherwood is passionate and dedicated to her work. She grew up as a curious little girl, fascinated by her famous archaeologist dad’ stories about lost world and civilizations, epic legends of long gone Amazon women warriors… Her dad was himself so taken with those myths, he lost all integrity trying desperately to prove the Historian Community he was right. His obsession cost him any reliability and he left behind the reputation of being a “crackpot”.

Jillian, now all grown up, followed her deceased father’s footsteps, and became a talented archaeologist. Unfortunately, she just missed a great opportunity to participate a tremendous expedition because of her last name. Sherwood is still associated to her Dad’s loon ideas, and it’s not the first time it has caused her prejudice, despite being brilliant at what she does.

Tired and enraged, she decides it’s time to prove her dad was not the deranged person the world thinks he was, and wants once and for all clear his name, her name.
Helped, or more accurately, tailgated by her leech of a brother, she prepares for her own expedition.

Arrived in Brazil and helped by a somehow shady investor, they recruit the services of Ben Lewis, a guide specialized in the Amazonian rainforest areas.

“Ever done it in a hammock?”

I don’t know where to begin to explain how and why I LOVED this story!
Heart of Fire doesn’t shine by it’s originality, but it just combines ALL I love in a book! The suspense, a great and interesting plot, a witty heroine, a cocky—not to say asshole— hero, bad guys, mystery, gradual sexual tension and a great romance! Add to this a scorching hot level of steam, and you have the perfect recipe!

I literally felt like I was reading the woman version of Indiana Jones!

Jillian was just such a strong character, I had no choice but to fall in love with her, she was brave, smart, independent and funny. She definitely needed that to give Ben a run for his money!

Ben was the typical bossy and arrogant alpha male. Behind his broody and obnoxious attitude, he early on proved himself to be a good man, by protecting and taking care of Jillian.
I loved watching him trying to seduce Jillian first as a game, then as a tactical maneuver to keep the hand up, and finally involuntarily! The poor man couldn’t for the life of him understand why his body was attracted to this slim, small breasted woman—not the type he usually goes for.

Their relationship, whilst slow, was really entertaining! Jillian doing her best to resist Ben, she had one goal, and did a great job staying focused on it. Her constant refusal and Ben’s tireless flirt was the perfect combination for a great quality banter!

“You have nice underwear.”
“I’m glad you enjoyed it. Did you try it on?”
“Nah. Just rubbed it against my face.”

“What’s funny?” she asked.
“Oh, nothing.”
“What? You’d better tell me.”
“He just wondered why we were making slap-slap in the rain, instead of in our funny little moloca—that’s ‘house’ to them, ‘tent’ to you.”
“Slap-slap?” she asked faintly.
“Yeah, you know.” He lightly clapped his hands together, re-creating with devilish accuracy the sound of wet bodies moving together in hard rhythm. “Slap-slap.”
He looked smug. “I gather they were also impressed by both my… shall we say presence, and my technique.”
“Shut up,” she gasped, trying to gulp back the giggles. “Or I’ll slap-slap your face-face.”

Still wary of Ben’s intentions, Jillian tries her best not to fall for her guide, but despite it all, his perseverance will pay and they’ll both gave in, finally shattering the well built sexual tension!
Heart of Fire is full of sexy moments, and Linda Howard delivered high level steamy sex scenes!

I won’t say much else about the story development, it’s yours to discover, and I can guarantee you are in for an epic adventure!