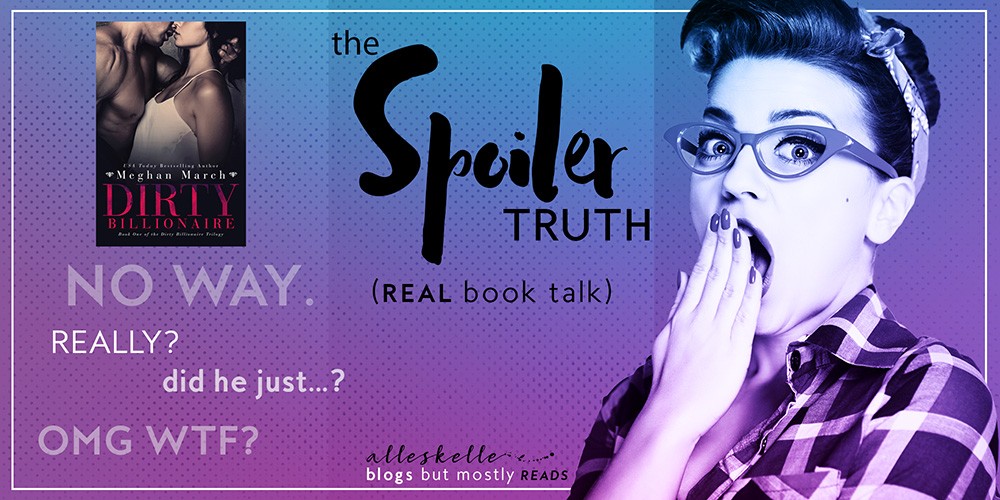 Introducing a new feature on the blog! The Spoiler Truth!

What is this really about?
Well, every once in a while, I’m going to talk about any current or latest “What The Fuck” books I might had.
Yes, they exist. You know about them. These are the books having you perfecting your eye-rolling technique, the ones that makes you trying to talk some sense into the heroine—out loud—, the ones you can’t help but laugh like a maniac at inopportune times, the ones making you wonder if you really have to finish it (even you, OCD people).

Now this isn’t a invitation to author bashing.

I know books are very subjectives, so I want to say for full disclosure that me having fun with the Spoiler Truth doesn’t mean I don’t respect your opinion or intend to demean it in any way.

Now, let’s start, shall we?

The Dirty Billionaire by Meghan March

I’ve got a big dick and an even bigger bank account. That’s pretty much where my bio ends. Honestly, I don’t need to say anything else. I’ve just sold 99% of women on going home with me.
Do I sound like an asshole to you?
That’s because I am.

And guess what? It works for me just fine.
Or at least it did.
Until I met her.

Books talk about sparks flying. Fuck that shit. With her, it was like emergency flares mixed with jet fuel. Or maybe just straight up napalm.
Only one problem.

She didn’t leave her name or number when she disappeared from the hotel room after the hottest fucking night of my life. Now I’ve had a taste of unicorn pussy—the sweetest, rarest of all pussy—and I need it again.

So what’s an asshole to do?
I took this problem to the street. A missed connection gone viral.
And when I find her? I’m keeping her.

I mean… on paper the blurb sounds hot right?

What do you mean it sounded terrible? If you start this with assumptions made on the blurb only, well, chances are this book is not for you.

But, if you—like me, enjoy some fun and sexy read, then you do agree it sounded hot on paper, RIGHT? At least I thought so and I loved this author previous series, another reason for me to get all excited about this Billionaire Trilogy.

If you had apprehensions about the blurb, let me be honest and say that I’m not a fan of Billionaire Romances. It got old pretty quickly for me. I’ve been there, Read that, got the ebook and paperback.

Okay. I don’t hate them, but I prefer my stories to be standalones, or cut into trilogies if the author was really pro-active and couldn’t really see herself/himself publishing a 1200 pages book. Then by all means, cut it in 3 parts.
But what’s the point in publishing less than 500 pages into 3 parts? Keeping the reader interested? Multiply the book sells? I don’t really understand the “need” to do so then. Especially when the releases happen a week or so from each other. But that’s a marketing choice.

So we have this Billionaire Trilogy, and despite the fact that the title alone should make me run for the hills, I’m all thrilled about it.

My friend Lana, that enabler whore, is half responsible for my enthusiasm. (That’s completely on her.) She has a thing for alpha-assholes (it’s a thing) and somehow her excitement transpired on me. I had to read it as well! I was eager, even!

But let’s cut into what made this Dirty Billionaire the subject of our first Spoiler Truth this month.

“No other pussy will do. This woman’s cunt owns me.”

Admittedly I knew I was going for some quality smut  and not a Jojo Moyes book, but still I’m one of those readers that needs at least the decency of smart characters to believe in a story. Yes, I’ll read smut at the condition characters are given more than 2 neurons.

The heroine could be the first clue as to why this book didn’t work for me. Young singer, latest winner of an America Gots Talent contest, Holly Wix is forced by her label to play an old and gay popular singer’s fiancée. And after being dragged one time too many in the mud by her fake fiancée she decides to finally give into her wild streak and do something for herself. Cues in New Year’s Eve in a posh Hotel’s bar where she has the brilliant idea to get herself a hot night of sex with a stranger.

What a great idea! (Okay, I’m kidding here, it was a dumb move but for the sake of the story… let’s move on.)

“I like having a wife who wants to suck my dick in a limo.”

Not. I’m sorry but to me he was just a jerk. A douche. Long story short, he got his hand on the “…tightest, hottest pussy his cock has ever had the pleasure to know.
… a fucking religious experience.”  for one night—his words, not mine— and need to find who this special snowflake was. Hence the media wedding proposal to Holly.

To get the ties severed from her label engagement, Holly is going to accept Creighton Karas’ proposal and marry him in Vegas. She’s to be at his disposition whenever the mood strikes. (in her head this all made sense. IN HER HEAD.)

Some golden nuggets, just for you.

“Once she comes, she’ll continue to concede to my every wish, because that’s how things work in my life. I give commands, and everyone obeys.”

” I’m going to rip those flimsy little panties right off you and eat that juicy cunt for dessert.”

There is this scene, first time in the hotel room, where I winced like someone was pouring lemon juice on an open wound but still giggled like a loon.

“… He kneels at the base of the bed, grips my knees, and pulls me so my ass is almost hanging off the edge and my ankles are resting on his shoulders.
He lifts something in the dim light of the room, I see it’s a bottle of whiskey. Never dropping my gaze, he opens it and drops the cap.

Um… strange time for a drink?

He leans close, and his breath teases my center. “I wasn’t done drinking earlier. So now I’m going to drink from this sweet little cunt and get drunk on you.”

He’s going to what?

I don’t have time to question, because within moments he tips the bottle. Chilly liquid hits me and trickles down… into his mouth. He catches the whiskey on his tongue, lapping up my wetness at the same time.

I don’t know about you, but I couldn’t stop laughing at this scene. And wincing. And laugh some more. I mean is it just me or high percentage alcohol on genitals just doesn’t sound like the brightest idea ?

If you start arguing with me about the fact that I never tried it, I damn well now the effect high percentage alcohol has on the tiniest wound. Imagine the heroine just had a waxing before? Or worse even, that she shaves! *wince* *wince*! Or even the aftermath? I mean Karas has one of those monster cocks (the heroine says so, obviously) surely her lady bits (the heroine words again) are going to be sore at some point…

Damn my logical mind for not switching off and enjoying the smut!!!

(Never before I thought I would write this.)

Followed by this charming thought : “…I’ve never felt like this. I knew she was something special; I wouldn’t have done what I did and married her if I didn’t think so.”

Can you tell my eye-rolling technique was close to be perfect? But not quite…

Where do I even begin? Let’s set up the scene first.

Karas and Holly are both having a tête à tête dinner at home, Karas had the excellent and tasteful idea to order sushis. This is Holly’s first time (as one of many) eating them and poor ol’ Kentucky girl never had on chopsticks in hands.

Here comes Kara’s handiness, getting Holly on his lap, teaching her how to use them. 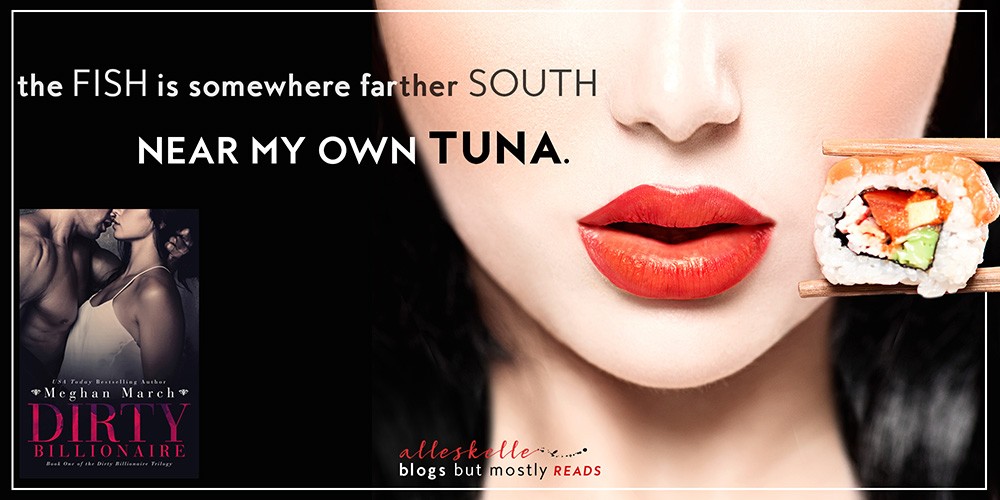 My hand shakes, and the chopsticks lose their light grip right before it reaches my lips… and the cold rice and fish slips right down the neck of the T-shirt I’m wearing.
Sushi might be delicious, but if feels kinda gross now that the rice is stuck to my boobs and the fish is somewhere farther south, near my own tuna.
Creighton chuckles reaching his hand down the neck of my shirt and scooping up the remains. I twist and watch as he pops it into his mouth.

And that was it. Eventually this little nugget (sushi) made me a quitter.

But the heroine cracking jokes as to refer her lady bits (her words, not mine) as HER OWN TUNA…

This just put a lid on the feelings I had since I first started this book. I couldn’t get into it. Even for the sake of smut… The heroine was not really bright, the hero a first class asshole, nothing interesting to him… And I couldn’t take the sex scenes seriously. And by seriously I mean that I couldn’t get turn on by them.

I know I’m in the minority about my feelings for this book, most of my friends on Goodreads loved it.
Maybe the tidbits I gave you even got you interested to read it, who knows?

What was your latest dud? Come on, tell me!

Boss in the Bedsheets

Boss in the Bedsheets

Terms of endearments in romance books : What’s your favorite? Which one do you dislike the most?
No judgment here, just curious! 😉 … See MoreSee Less