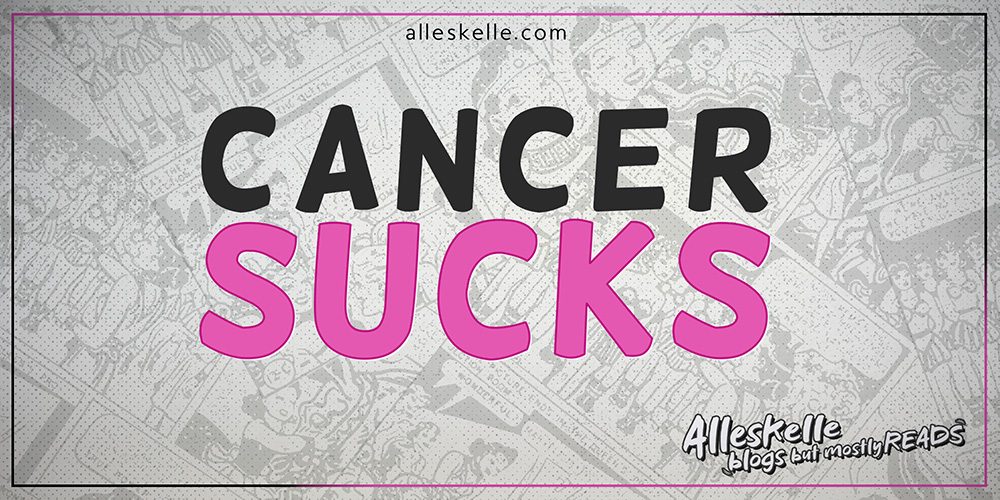 I’m back! I never stopped hearing the books calling and I missed my book friends and their book chatter terribly.

If you are just passing by, new to this blog and wondering what the hell I’m blabbering about, I’ve had to take a leave of absence because of health problems. Not my first time battling against cancer but turns out it isn’t getting any easier, quite the contrary actually. I thought I would fall into a chemo routine toward the end of 2016 but it was anything but routinely.

Seven years ago, I was diagnosed with a triple neg stage 3 breast cancer  and remember my first chemo rounds followed by 35 rounds of radiation were rough but my body was strong and I got the upper hand in the end and actually tolerated everything rather well. Or that’s the way I’m remembering it all anyway.

This past year, chemo was not as easy to get through despite my motivation to kickass.

First round knocked me well and good on my ass and I was admitted in ICU for a week. Same thing happened second time and the 3rd. They kept lessening the doses but my body was just not strong enough to get through the first part of chemo.

Later my protocol changed and rather than having a big shot of drugs one every 3 weeks, they scheduled me for lighter sessions weekly. I knew this was coming but I was hoping we would stay on schedule. In my mind I was also thinking ( still am ) that lessening the doses was stepping back. It was letting the cancer win.

That was a bust morally and my usually positive mind and attitude left the boat right there. 7 years ago, I just knew I was going to kick cancer’s ass. I never doubt it and really spent my year of treatments rather confident and serene. The last 2 relapses knocked that sentiment for good though. There is no certainty in my mind that things will go as expected.
Going weekly to the hospital just sucks. There is no other way to say it. Not only that but you have less time to recover from each chemo, and it feels like all you do is visiting hospital, labs, and seeing the nurse at home.

Then to add to my black moods I started noticing strange things happening to my hands. I was already forced to walk with a cane because of muscle loss, pain in my bones and overall fatigue but around mid-october I started dropping things on top of not being able to use my hands for anything requiring a little strength like opening a bottle of water or even pulling on jeans! I couldn’t even do something as simple as putting earrings without asking help to my son or Swissman.

My oncologist told me the drugs used during the second phase of my protocol could damage the nervous system and signs like I was describing  and showing were to be taken really seriously so they decided to lessen the dosage once again.

It started with numb fingertips and ended with tremblings and difficulties with everyday fine motricity.

My doctor continued to lessen the weekly doses hoping it would help but late November it became clear there was nothing else to do but stop chemo early and hope I would recover the use of my hands later. She explained it could take time but also was very upfront and told me sometimes there was no recovery possible.

Today I still haven’t recovered the use of my hands, typing is harder than before but at least it doesn’t hurt anymore, but I still drops a lot of things from my hands, tremblings are still there. My handwritting changed a little, I’m having difficulties drawing and sketching like I used to do daily.

But it is what it is. I can only hope it’ll get better in the months to come.

I won’t go into more details, but as for now my treatments cancer-wise are finally over and I’m not due for a check up until at least a few months ! That fact itself is a reason for celebration ! 🙂

So of course, all is not truly over yet and never will be, as I’ve been recommended to take preventive actions in the months to come. But let’s say I’m allowing myself to step back and have a breather from all the medical and heavy stuff. From what I’ve learned from my personal experience with cancer and 2 relapses, you have to accept that it’s there, hovering as a shadow, but you have to try to let it go and focus on the positive more than anything.

And that’s what I’ve tried to do while I was away. I focused on my little family. I took care of myself. I acted selfishly that way and I don’t feel bad for it.

I missed the book world immensely and I’m so happy to be back! I feel like I’ve missed tons, but also blessed to feel like I have hundreds of books to look forward to and happy bookish news to catch up on!

I’m very belatedly wishing all of you, friends, authors, fellow book lovers a happy 2017, may this new year be filled of awesome books!

I also wanted to send a very special thank you to all of the friends, authors and followers of this blog who sent words of encouragement and well wishes. I love you guys and love this romance book community. I’ve been off social media the last few months and I’m trying to catch up on everything, every messages, mails, so bear with me, I’ll answer to you soon!