Nocte definitely makes for a different read. This book is a real page turner. Once you’re in, you won’t be able to get out of there. The incessant questions, secret and mysteries will have your mind reeling. I thought I was prepared for it, I told myself I’d be more attentive for clues, but it didn’t help me at all, Courtney Cole had me from page 1. Well done!

Buy for Kindle
Buy Paperback
Add to Goodreads
The Story 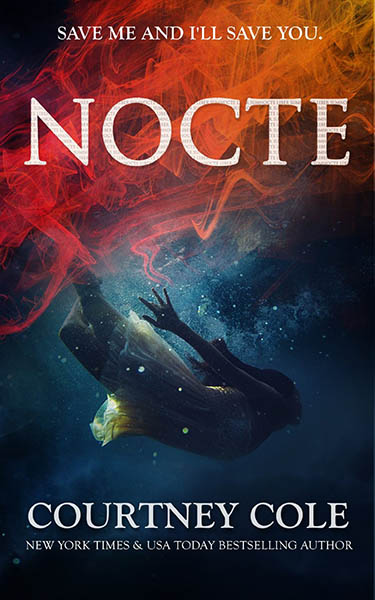 My name is Calla Price. I’m eighteen years old, and I’m one half of a whole. My other half– my twin brother, my Finn– is crazy. I love him. More than life, more than anything. And even though I’m terrified he’ll suck me down with him, no one can save him but me. I’m doing all I can to stay afloat in a sea of insanity, but I’m drowning more and more each day. So I reach out for a lifeline. Dare DuBray. He’s my savior and my anti-Christ. His arms are where I feel safe, where I’m afraid, where I belong, where I’m lost. He will heal me, break me, love me and hate me. He has the power to destroy me. Maybe that’s ok. Because I can’t seem to save Finn and love Dare without everyone getting hurt. Why? Because of a secret. A secret I’m so busy trying to figure out, that I never see it coming. You won’t either.

This is going to be an almost ALL VISUALS review.
(Fine by me if you ask, the book completely won me over, and I was glad to actually write this down my way. I am still thinking an re-thinking all those little details… Wow.)

Thing is, I can’t say much about this book for fear I’ll give you hints or clue you in about the secret it carries.

What can I say about Nocte, really? I am at loss here.
See, when I first asked my friends about this intriguing book, everyone that had read it suggested—not to say URGED— me to not read a thing about it, to just trust my guts and dive in as blind as I could. And I did just that.
So much that the only thing I had in mind when I started reading this was : the blurry and thought-provoking blurb, and the “Oh my God!” reactions all over my Goodreads’ feed.
Needless to say, I was sold by both early readers’ enthusiasm and the high secrecy around it all.

What it’s safe for me to say are the basics, that you’re going to read a story about Calla and Finn who are brother and sisters and live with their dad in a what you would consider a creepy funeral home. Calla and Finn both share an intimate and special close bond.
Calla is going to meet someone : Dare.
I know, it isn’t much, but those are the only facts I can reveal for now.

This story, as I’m sure you would have assumed by now by the thick as fog mystery surrounding it, is a complete mindfuck. But an Oh so intelligently crafted one.
Courtney Cole really outdid herself here, intricately hinting all through the book at the big secret, but so discreetly that you won’t see it coming until the end.

Something I’m willing to share with you, is a little advice.
If you must read this book, be sure to have a few hours on your own, maybe a retreat in a secluded place where you’ll be sure to not be disturbed. Do not even attempt to start this at bed time, like I foolishly did. Contrary to what its title may impart, Nocte, isn’t a bedtime read. And I’m not even talking about the creepy darkness the whole story is woven in… No. NO.
I’m talking about the fact that Nocte is undisputedly UNPUTDOWNABLE.

Calla, Finn, or more precisely, Courtney Cole, set up the perfect trap. The narration was enthralling, you’ll start reading one page, and find yourself devouring the whole book at 3 AM on a week day.

I wish I could tell you more, share my impressions about all of it, but it would ruin the book for you. But believe me when I tell you that this author is very talented, so much so that I was actually hearing ALL the characters. And this creeped me the F*** out !!!

Now, this isn’t over, we’re only closing one chapter of the Nocte Trilogy, and I must warn you about the mother of all cliffhanger at the end of Nocte. Maybe one of the worst I’ve EVER read.
I knew about it, I usually won’t even read trilogies because of this, but I think in this case, the cliffhanger is justified. We’ve been given answers, but those answers are just adding fuel to the whole mystery, and to be honest I was glad for that. The whole purpose of this trilogy would be null if not for the incessant questions it leaves you with.
(By the way, thanks to Lana who had the patience to hear all my ramblings an theories, and who stayed my friend even though at some point I was almost stalking her for answers! I would highly suggest you to find a trustworthy and patient friend to be the recipient of your frustrations.)
You want to think and re-think all little details, test all the theories before heading to book 2,
Verum, which isn’t released yet. (February, 2nd, 2015)

He’s worth the wait.
Despite our secrets.
Or maybe even because of them.

I sincerely hope this review will help or motivate you to pick this book, even though I’m not saying much about it. I don’t think I could categorize Nocte as YA or Romance, it was a little bit of both actually, but the main attraction here definitely are the Suspense and Mystery.

The chemistry between us is palpable enough to touch, weaving around us, pulling us together, the air snapping with its electricity.

Ultimately, the only thing you really have to know is that Nocte is a real page turner, and that you’d be a fool to miss it out!