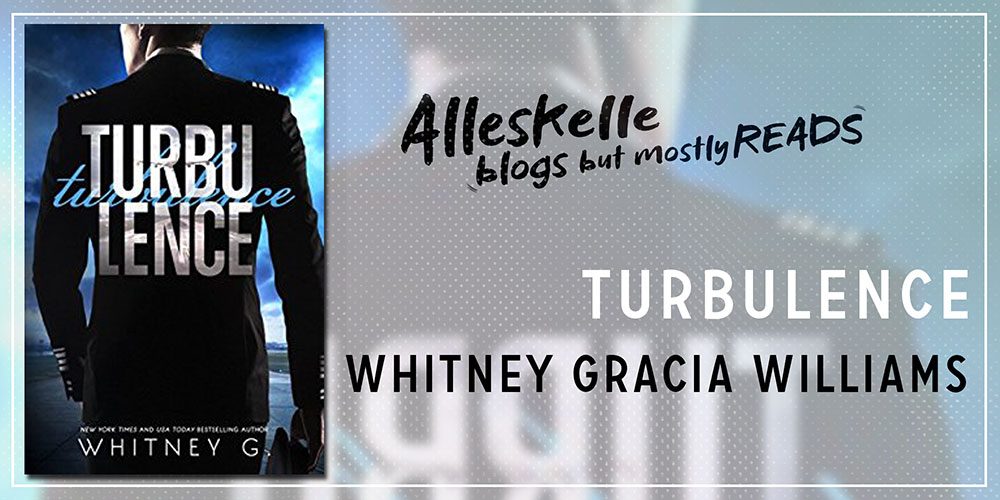 Sadly for me, Turbulence didn’t make me grip the edges of my seat.

Fuck me recklessly
Kiss me harder.
Take me again and again…
He and I met under a cloud of clichés:
Boy meets girl. Boy charms girl. Boy fucks girl.
Our story was supposed to end right after the orgasms, right after we went our separate ways.
But then we saw each other again…
And neither of us could walk away.

Our rules were simple.
Our passion was scandalous.
Our hearts were supposed to be safe…
But when you find something so all-consuming—something so intoxicating and inescapable, you’ll risk everything you’ve ever had, even if you’re destined to crash and burn.
This is us.
This is our messed up love.
This is turbulence.

I’m not going to lie, I was much more excited about it last year than I’ve been the day it finally landed on my e-reader. Let’s blame it my reader’s moods. Minor spoilers and ranty rambling ahead.

I always loved the office romance trope, the taste of an illicit fling, so when I read the blurb for Turbulence last year? I was gone!
I mean, I enjoyed this author stories and writing in the past and also had a great memory of The Layover, the short story of Paris and Blake, also set in an airpot and thought “Okay, if Whitney G is able to deliver a sexy as hell tale about two strangers meeting on a plane in just about 100 pages, I want to read whatever her next idea on the same subject will be.“

Turbulence started off just great and the promise of the cliché/fantasy of the Stewardess ( yeah, the flight attendant) nailing the hot Pilot (and vice versa. Okay for male/female equality’s sake let’s say nailing each other.) got me all excited !
I enjoyed the chapters’ titles, the prologue setting us up right into the mess of Gillian and Jake’s relationship, promising a sexy and thrilling as hell story and just then, yes, Whitney G had me hooked, the intro was written with brio.

Until the dual POV and time jumps started to happen. I felt lost then.
Too many time jumps, too many redundancy. What I started to like about the story or the characters began to annoy me rather quickly.
Take Gillian for example, I loved her at first. So full of sass and a bit eccentric, she seemed to be a strong woman looking for independence, right until she met Jake… Then she executed a one-eighty and became a pushover, dare I say a door mat in the making.
I just had this scene from “Airplane!” replaying over and over in my head :

Jake, for all the assholes I’ve been lucky to meet in my romance novels, was the worst of them (Hey now, some of them were truly charming in their assholenessery! ). Often described as cocky in the book, I just wanted to say he was not cocky at all but just a first class ass. Literally. I couldn’t care a bit for the guy, and I usually like asshole types heroes who can redeem themselves in the end, not afraid of a good grovel, but this Jake Weston guy? Not my kind of hero.

I was never able to connect with Jake neither Gillian for the simple and unique reason that the dialogues were damn near inexistent. For all purpose the dialogues were resumed as bickering sessions about the oh so important rules made in an airport stairwell regulating the nature of their arrangement.
I enjoyed the ideas the author had for this book, namely the story within a story, the texts, emails and blogposts… But all of those elements together? It was too much for me to be able to keep up and care. Add to this the drama revolving between both characters and their families… Talk about layers.

I enjoyed Whitney Gracia Williams’s witty and engaging writing, as always. She also knows how to write a good sex scene but even all the sex in this book wasn’t enough to keep my attention. I overall liked the book, but it was just a nice read for me.